I was walking in the woods with two of my favorite humans today. We started coming up with cheesy sayings about life and the leaves changing color. But while I was napping in my hammock amongst these trees, I started seriously thinking about it. I am in a season of change, and I am slowly learning to embrace it. 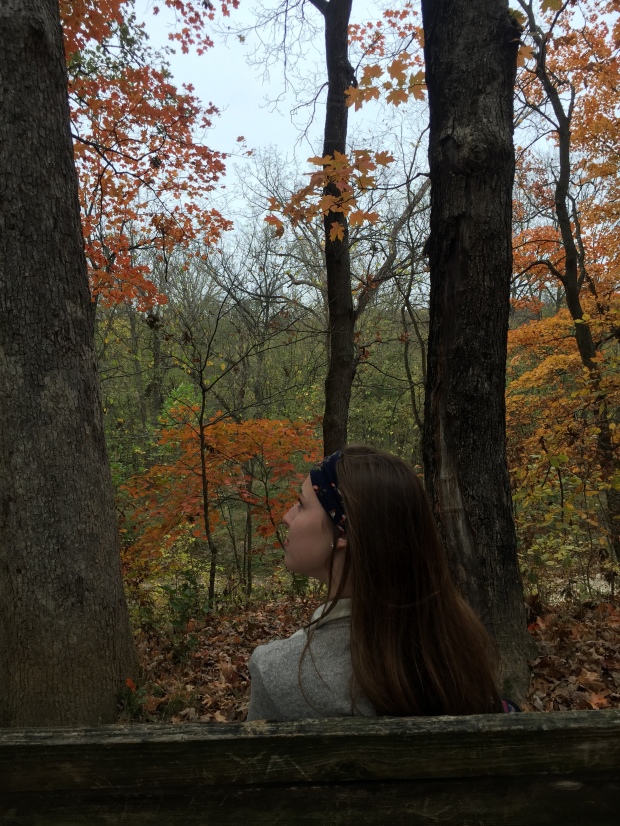 I’m over the halfway point of college and people are starting to expect me to know what comes next. But I don’t. I’m in this weird limbo of not quite being a kid, but not quite being an adult. All my friends are in this limbo too, so we’re a hot mess of stress and confusion.

What I can be thankful for is that we are in it together. I can’t express enough how lucky I am to have the people I do in my life. The constant encouragement (or commiseration) that I receive from my fellow students is incredible.

I am a person who hates change. But this weird limbo is slowly forcing me to embrace it. I am learning that sometimes change is good. Change is scary, but it’s making me who I am. This is the realization I had while enjoying the fall colors today. 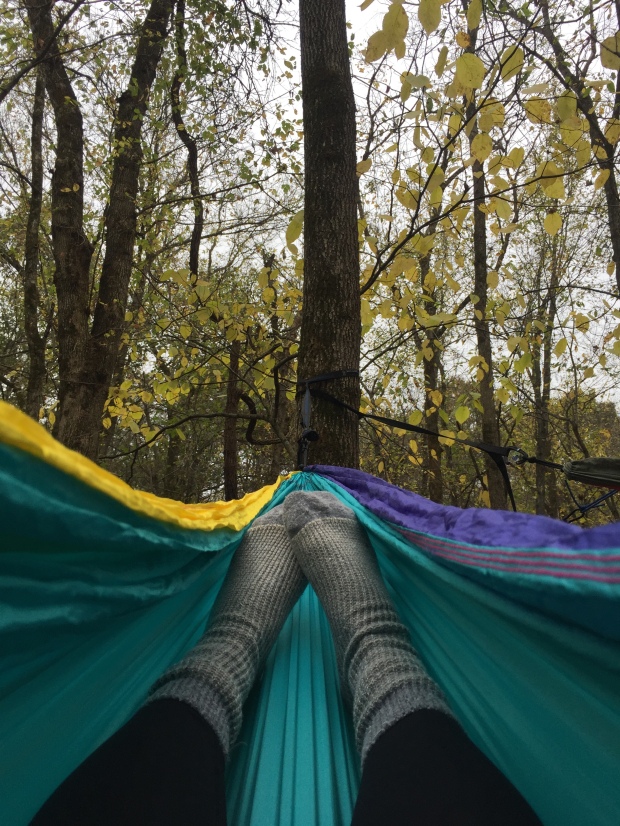 Over the past few months I have gone through a lot of changes. They didn’t all seem so good at the time. I began classes that made me happier and less stressed, I made some really incredible new friends in some of my classes, I also left some friends behind. I had a relationship end that taught me a lot, I moved into my first apartment and had to start doing things for myself, I improved a lot of my routines to keep me happy and healthy.

This semester has been a growing up experience for me so far. A lot of times I feel like I can’t get a grip on one thing before it hurtles by. It stresses me out beyond belief. But when I take the time to look back, I realize how far I have come.

I am happy and healthy this semester. And this is a change I am okay with.

They don’t tell you this when you’re little, but a lot of the purpose of camp is to help you build firm foundations for your life. The goal is to give you the tools to grow into a stellar person, and to have some people who will help you get there.

You can’t build any structure without a foundation. That’s common sense. The same goes for building yourself as a person. There must be solid ground that will last a long time in order for you to grow. This usually means good morals, goals for life, strong character, and many other tools.

Most of what adults do while you’re growing up is secretly shaping you into a better person, secretly preparing you to be an adult. It’s a hidden instinct humans have. We want to make each other better humans without even realizing it sometimes.

Camps, retreats, clubs, and so many other activities are just more obvious ways to try to make other people into better humans. To give them firm foundations.

During my time at camp this summer, I had a friend talk to me about building people into foundations. She made me think about relationships in a way I never have, and probably should have before. She told me you can’t build people into your foundation. People aren’t as dependable.

Now in the context of Christianity, Christ should be the firm foundation. This is what she was reminding me of. Was Christ really my foundation? A tough question for anyone to answer.

But, I don’t think it’s totally true that people shouldn’t be built in our foundations. I have been reflecting on this for several months now. We have been given other people to do life with, so why shouldn’t we depend on them every now and then? People can push you to build better foundations.

There’s one thing that’s right though. It’s something I’ve learned the hard way. You have to be careful who you allow to be built into your foundation.

Family is always a good answer to who is right or wrong to build yourself up on. Family loves you relentlessly and won’t leave you. Family will push you to be a better person and help strengthen your foundation. 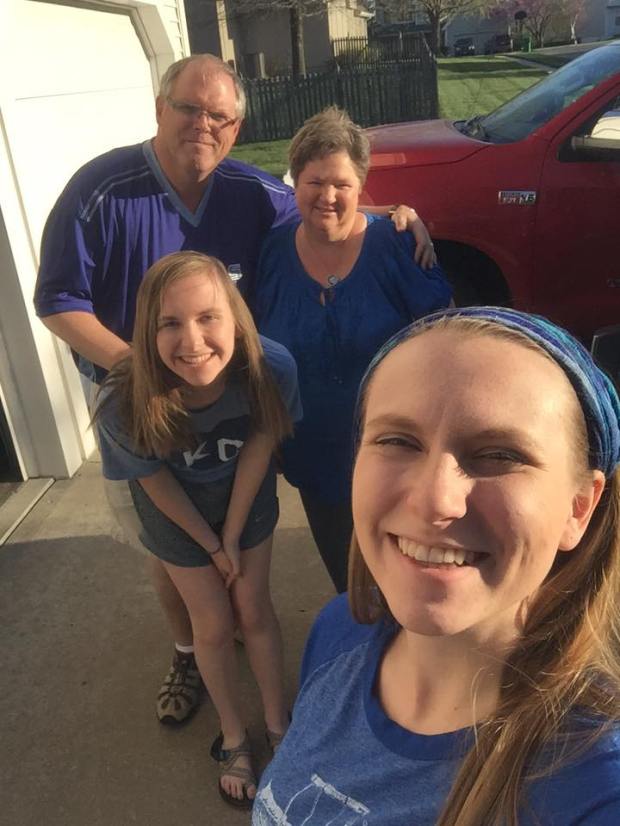 Friends are harder to think about. Even best friends don’t stay best friends a lot of the time. Friends come and go as seasons of life change. This can be hard when looking for people to support you through life. But I think it’s important to have friends in your foundation. However, going along with the building metaphor, it’s important to decide how much weight you allow them to support. You have to judge which friends are in your life for a season, and which are there to walk the whole way.

We all make mistakes. We all put too much weight on certain people sometimes. We all get let down. We all let people down. Here’s the best thing though: we get to rebuild. It may be hard. Our foundations may have some cracks or holes for a while, but that can be fixed. Other people are there just waiting to help you fill it back in.

That’s where I’m at right now. Seasons of life are changing, and I’m growing up. There are several people who I have realized have worked their way out of my foundation. And that’s a hard realization. But it’s also incredible to see who has stuck around to hold me up. I am so very grateful for my family and the others who have stuck around.

In life, other people are going to give you the tools to build a stronger foundation for yourself. And it’s okay to build them in every once in a while too. Other people are placed in your life for a reason, so let them make you a better person, and help them out some too.

One of the most important things I have learned is that camp doesn’t happen without other people. It’s not a solitary activity. All the fun, growth, reflection, and everything else cannot happen unless you have people doing it alongside you. Sure, you can do those things all by yourself. But, the camp setting proves that the results are magnified when you’re doing it with other people.

I believe that you learn best from other people. Something that someone else says or does often sparks a new thought inside of you. This is a cycle. That’s why student council camp was so effective for me. You can’t learn leadership qualities without people to lead you and without people to lead. At church camp, spiritual growth happens by learning from others’ stories and talking through life with them.

I feel it is extremely important to keep this mindset year round. The past few weeks I have been extremely busy and often try to spend any free time I have taking some time for myself. I am a firm believer in personal time to keep your mind healthy. However, I realized once I got a free weekend that I was continuing to be stressed because I hadn’t been spending enough time with other people.

My friends forced me to take some time off and go hiking and hammocking with them. They got my mind off of everything. We just sat in peace and talked about life. I always stress how great it is to foster relationships, but I sometimes forget to maintain those myself.

Without people I get caught up in my head. I get concerned with my successes and failures, when my biggest failure is actually missing out on time with the people I love. This past week was a good reminder that people make me happy and help me get through life. Life is a team effort. We need others to grow and learn, but also to keep us focused on enjoying life as we go.

Don’t take the people who love you for granted.

My favorite part about camp? These past few years it has been hammocking. Now, you may wonder why. Why would I choose to sit around in a hammock when I have a whole camp full of things to do?

The answer is simple: It’s what makes me happy.

If I have learned anything from camp, it’s to do what makes you happy. Find your joy and let it fill you up, then spread that joy to others.

I love sitting in a hammock because I do it with my favorite people. Nothing is boring when you are with people you love. Sitting in hammocks is the perfect way to relax, while getting to have great conversation and learn from other people. It’s an environment where people let their guard down and makes conversations about life and love flow freely. Some of my best conversations have happened 10 feet up in a tree.

Sitting in hammocks at camp is what gave me the people who are now my closest friends. A couple of us happened to have the same hobby, and over time others who had sat in our hammocks with us got their own and joined us. We got to spend true quality time together. We had no phones at camp, just each others’ company. I think a lot of times we forget what it’s like to just sit and get to know someone. People are the greatest gift there is, and we have to remember to appreciate the people we have while they’re around.

Hammocking has taught me about relationships. It has taught me to care about people: what they have to say, what their dreams are, what their fears are, and so much more. Sitting for hours in total tranquility with another human being is a greatly undervalued activity in our world today.

It is important to have people in your life who will listen to your thoughts and love you for them. Having people who take common interest in things and encourage you to be a better person is what can make or break a person.

I also love my hammock because I can grab it and go. I can hammock wherever, as long as there are two trees and good company. Spontaneous adventure is better with people you love.

I have also found that taking my hammock and a buddy and heading off on a trail is my way to cope with stress. When I can’t handle busy weeks on campus, I get out in the sun on the weekend and just appreciate the a beautiful world and the beautiful people in it. Sometimes just sitting in silence and taking in the view is the peace a tired soul needs.

I hope that everyone can find what brings them joy and peace. I also hope it’s with people who bring joy and peace. Love and laughter may happen sitting in a sunny hammock for me, but everyone should have an outlet where they can just step out of the world for a moment. I have found how incredibly important it is to take care of your soul. You’ve only got one, so don’t wear it out. Fill it with joy, then when it’s full, fillother people’s with joy too.

Plus, who says hammocking is all relaxing? You’ve got to get up there somehow. The fun is often in the climb.